The RS7 comes with mildly freshened exterior styling i.e reshaped headlights, a different grille and brand new headlights There is a new upgraded MMI infotainment system and a delicately revised gauge cluster too.

Ever since the model debuted back in 2012, the RS7’s shape happens to be one of the most striking elements. The Audi RS7 sports 20 inch wheels, a sport body kit, auto dimming mirrors, rear and front parking sensors and LED taillights and headlights.

Leather seating is offered as standard. The freshly designed leather upholstery which is available is offered in the RS7 and the S7 models features diamond stitching. The RS has been engineered with a standard seating of 4 people. Other notable features include a LED lighting, driver memory setting, and an 8″ display screen too. There is also a power lift gate, a sport differential, a variable ratio steering wheel and a sun roof.

The Audi RS 7 is powered by a turbo charged 4.0l v8 engine which delivers an estimated 560 horsepower and 516 pound per feet of torque. An 8 speed automatic transmission, a sport rear differential and a self-locking center differential are offered as standard. The EPA fuel economy for the Audi RS 7 is estimated at 20 mpg i.e. 15 city and 25 highway. 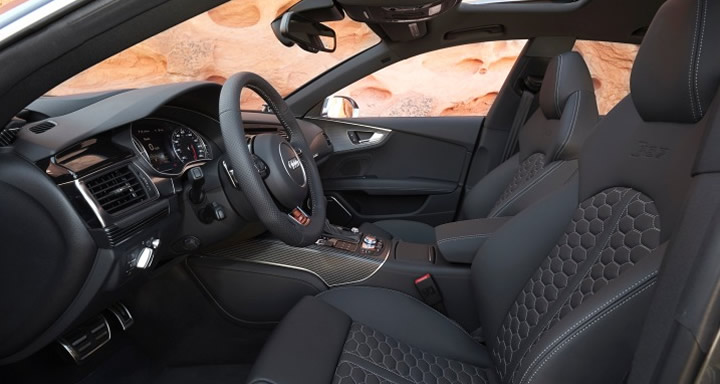 Standard safety features for the Audi RS7 include antilock disc brakes and also front and rear parking sensors. There is also a blind spot warning system. A standard Audi Pre Sense collision mitigation system which closes the windows and tightens the safety belts is also offered as standard.