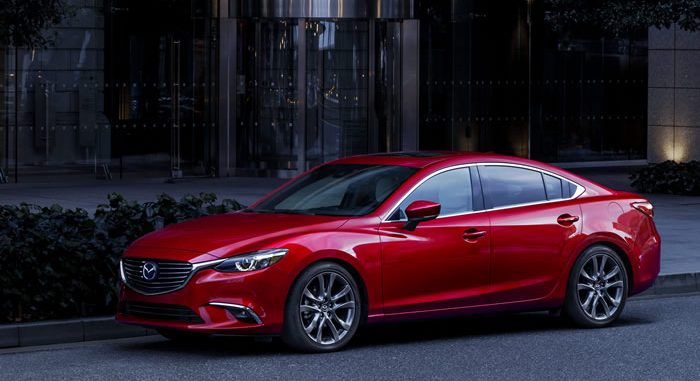 A minor shuffling of features from standard to optional further raise the 2017 Mazda 6’s value proposition. In addition, a new G-Vectoring Control system guarantees the new Premium package has substituted even greater agility and the previous year’s Technology package.

Exterior improvements for the 2017 Mazda6 are not massive, but they do enhance the sedan’s look, providing it a stronger styling expression. Up front, slightly refined headlamps with reshaped turn signals and the new LED layout replace the previous units.

Also, the grille is new, now sporting 6 horizontal slats instead of 5 for a bolder presence. Improvements continue below with the lower apron that features new fog lamps that are embedded in the revised casings with some boomerang-shaped chrome trims. The Mazda6 has, even more, updates inside, though most of them are just noticeable upon closer inspection. The center console and the dashboard are the most noticeable changes. The former gained a host of new features and a significant reshape, including a wider center trim, revised A/C vents, and a freestanding, 7″ display.

In addition, the center console is new, sporting a revised gear shifter and an advanced control layout. The instrument cluster comes with the new dials and graphics. Mazda also concentrated on reducing gaps between the interior parts, with the cabin now showcasing an improved feeling of quality finish and fit.

The 2017 Mazda 6 front-wheel-drive is powered by a 2.5 L 4-cylinder engine which has a horsepower of 184 and 185-pound feet of torque. Fuel economy stays the same with both transmissions. The manual sedan returns 37 mpg highway and 25 mpg city. The ratings jump to 38 mpg on the highway and 26 mpg in the city with an automatic gearbox. The 2017 Mazda 6 sedan has also been installed with the standard safety features that include traction control, antilock disc brakes, front side airbags, full-length side curtain airbags, stability control and the active front head restraints.