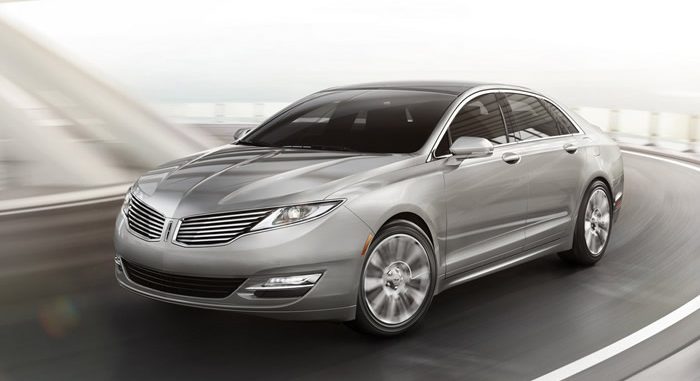 Newly engineered sheet metal gives the 2014 Lincoln MKZ a more elegant look from previous models. The 2014 MKZ comes equipped with a very large split-wing grille, which replaces Lincoln’s prior vertical design that resembled a “waterfall”. In a brilliant yet subtle move, Lincoln has given their MKZ models a capless fuel filler, eliminating the requirement for a twist-off gas cap. The interior of the MKZ is likely its most glaring weakness. The ergonomics are fine, but the materials make this car’s visual appeal nothing to write home about. Touch-capacitive buttons can be frustrating to use because of poor response, and the car lacks conventional audio and climate controls, opting instead for a bunch of on-screen menus. The MKZ’s large dimensions do not translate to a roomy interior, as rear-seat legroom and headroom are on the lower end.

Some of the most prominent technology features in the MKZ include an 11-speaker audio system and the MyLincoln Touch multimedia hub with an 8″ display and conversational voice-recognition software. As optional, Lincoln has options for larger stereo/speaker systems, plus heated back seats.

The turbocharged 2.0L 4-cylinder is the basic engine choice in the 2014 MKZ. A hybrid powertrain is also an option; it improves fuel efficiency but decreases speed and horsepower. There is also the option of a 300hp 3.7-liter V6 engine, although the difference in performance isn’t too vast. Both engines are run through a 6-speed automatic transition, while the hybrid model channels power through a continuously variable transmission. Front-wheel drive (FWD) comes standard, and all-wheel drive (AWD) is restricted to non-hybrid models. Lincoln was evidently trying to maximize the safety of drivers and passengers alike in the 2014 MKZ. The car comes suited up with eight airbags, a detailed variety of stability-control systems, plus Lincoln’s SOS Post-Crash Alert System. This feature activates the horn and hazard lights in the event of airbag deployment.