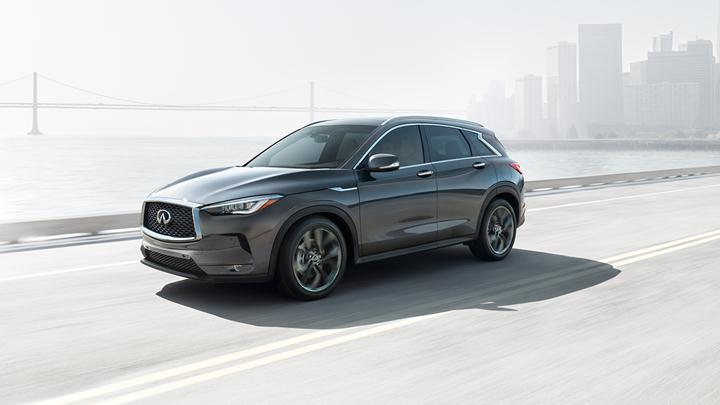 The 2019 Infiniti QX50 is a luxury, compact crossover SUV that comes in 6 variants: the QX50 Luxe & Luxe AWD, the QX50 Pure & Pure AWD, and the QX50 Essential & Essential AWD. The SUV seats 5 people and comes in 9 standard colours. The QX50 is controlled by rack electric power steering (Rack EPS) and possesses a turning diameter of 36.4 feet. The tires are 235/55R19 flat run; all season tires are 19 x 7.5-inch aluminum alloy wheels. In terms of suspension, this car features a MacPherson strut with over shock absorbers in the form of coil springs.

A key feature of the 2019 Infiniti QX50 is the automatic LED headlights that feature daytime running lights.

The glass is designed to be UV ray reducing and the mirrors are power adjustable. It is worth noting for those wintery mornings that the rear window has an auto-defrost feature. In terms of wipers, the front windshield wipers feature a speed sensitive, flat blade design as well as a rear window wiper.

The interior of the QX50 features leatherette appointed seating with 8-way, power adjustable front seats. Aside from this, it has a dual-zone automatic temperature control system and folding back seats for extra boot space. These cars also come with 12V outlets located in the center console, the boot area, and the back of the console. The audio systems allow for wireless connectivity and feature Bose Performance Series 16 speakers.

The safety features include the QX50’s advanced Infiniti airbag system, seat belts, and occupant classification sensor. The LATCH system (lower anchors and tethers for children) is also featured in the 2019 Infiniti QX50 for those with small children. The QX50 also features a 4-wheel anti-lock braking system and electronically powered brake force distribution. It is worth mentioning that these cars also have predictive collision warnings for the front of the vehicle. The HUD (heads-up display) feature on the 2019 Infiniti QX50 is a feature that allows you to see certain information about your car on the windshield. This feature can be turned on and off via the HUD button on the main dashboard. The settings for this feature include: adjusting rotation, adjusting brightness, adjusting the display height, current speed, as well as a GPS feature. Aside from this, the QX50 also has ProPILOT assist, a combination of cruise control, assisted driving, and distance control to make driving as safe and as easy as possible. The long-distance detection sensors found at the front of the vehicle also help combat the occurrence of accidents.

The engine in this SUV is a 268-hp, 2-litre variable compression turbo engine, featuring 14 cylinders. It has an EPA estimated fuel economy of 24 miles per gallon in cities and 31 miles per gallon on the highway. It features an XTRONIC CVT transmission.