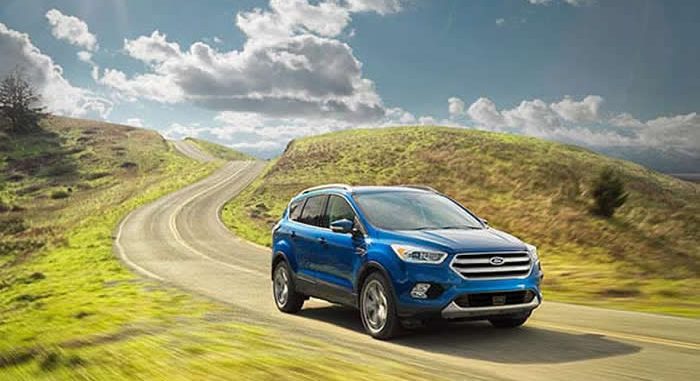 As one of the most popular vehicles in Ford’s lineup, the 2017 Ford Escape is a best seller for a reason. There have been a few changes to the 16 year old car with a more contemporary exterior design, and some new interior perks too. Ford are trying to ensure they appeal to the new demand for SUVs and crossovers and they’ve done a great job with the Escape.

The exterior features a classic Ford Escape look with a chrome highlighted grille with the iconic for emblem in the middle. On either side it has headlights that wrap around the sides of the car. It is a fairly large car, although not as bulky perhaps as some of its peers. There have been active upper-grille shutters added to help streamline airflow into the vehicle at higher speeds. An exciting feature of the Ford Escape is its panoramic roof with a panel that opens up completely and a fixed rear skylight. This is available on the SE and the Titanium versions. They also have different types of available interiors from cloth to leather depending on your needs a preference. The newly placed shifter and parking brake have made space for cup holders and also a new space to store your phone. The center armrest has also been redesigned for more comfort and efficient storage.

The Escape comes jam-packed with technology including functions that can warn you if you are drifting out of your lane, alert you to a vehicle in your blind spot, help you maneuver in and out of tight parking spaces, and even open the boot for you as long as you give the underside of the rear bumper a kick. It also has an advanced infotainment system that you can connect to called Sync Connect and Sync 3.

The 2017 Escape has three different engine options, ranging from the 1.5l version to the 2.5l one. The 2.5L engine has a 168 horsepower as well as 170 lb-ft torque. The standard engine comes matched with a 6-speed automatic transmission, and the EPA fuel efficiency rating is 21/ city and 29/ highway making a 24 MPG combined rating. Some of the safety features were mentioned in the technology section, but it is worth noting the systems in place to keep the driver and the passengers safe. Important features include the collision warning system, lane drifting system and more. It also has all the necessary airbags in place, plus crush zones to keep the cabin as safe as possible.