The Jeep Wrangler needs credit for its sheer endurance if nothing else. Automotive experts have referred to it as the quintessential off-roader which has an unmistakable shape and 7-slot grille which make it aesthetically outstanding. The Wrangler has great interior and exterior features which make it worth its price of $23,895. The Jeep Model is indeed one of the greatest and most recognizable SUVs to own in its class.

The exterior design of the Jeep Wrangler is unquestionably that of a Jeep. The unique box on wheel shape that features no compound curve was designed for ease of manufacture. The vehicles upright windshield gives the driver and the passengers a great outward visibility. The upright windshield can also be folded down for the off road trips especially when the driver needs to lean over the vehicle’s hood. The tires which have pushed out to the corners give it a unmatched approach together with departure angles. Available in black to firecracker red to army tank green you can be as subtle or as stand out as you like!

The standard equipment for the base model include a tilt only steering wheel, cloth upholstery, a height adjustable driver’s seat, a fold forward back seat, air conditioning and an 8 speaker sound system too. A Power Convenience Package is also available and features keyless ignition and entry, a security alarm and heated power mirrors, though these features come at an extra cost.

The 2016 Jeep Wrangler comes with a standard 3.6l V6 engine which delivers 285hp and 260lb per feet of torque. A Rubicon feature is available and features an upgraded transfer case and short gearing. A 6 speed manual transmission is standard, while a 5 speed transmission system is optional. The EPA fuel economy estimates for the 2016 Jeep Wrangler is 18 mpg combined i.e. 17 city and 21 highway. 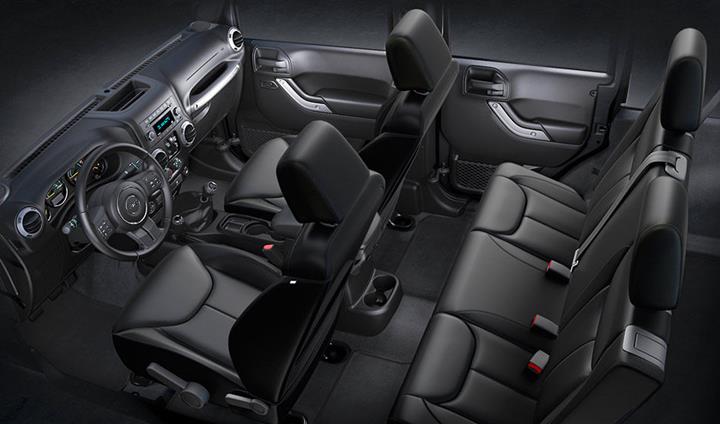 The standard safety features for the 2016 Jeep Wrangler include traction and stability control, antilock disc brakes and also front airbags. The front side airbags are offered as optional. There is also trailer sway control which is part of the electric stability control feature allows you to tow loads of up to 3,500 lb (extra heavy duty items) and still stay on course.