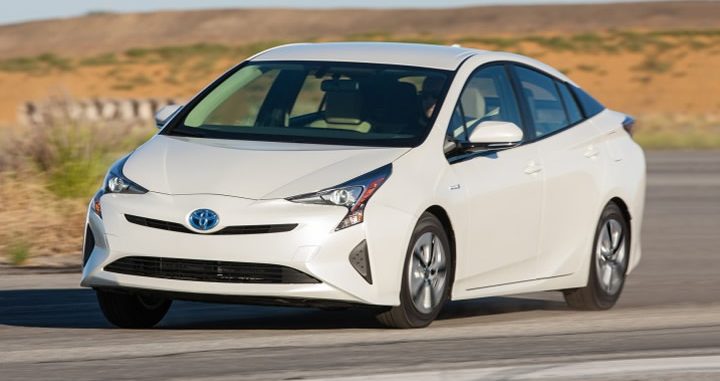 While it went through a major overhaul last year, we see some improvements again for the 2017 Toyota Prius. Affordable safety features are the biggest change to come to the Prius.

In 2016, the Prius took on a more sculpted nose and a better overall exterior shape. The lower section of the rear bumper is blacked out and the Bi-LED projector high and low beam headlights with auto-off feature are standard. 15″ 5-spoke alloy wheels are also standard on the base model but if you want to upgrade to the 17.5″ alloy wheels, you need to also upgrade to the Three Touring model which starts at $28,100. Compared to older models, the 2017 Prius is much more comfortable. The rear seats could do with a bit more headroom but you can still fit 3 adults if you need to. The rear seats are also split-folding and if you upgrade to the higher trim levels, 8-way power adjust ability is available. The seats are cloth covered and 6-way manual adjustable.

Standard safety features in the 2017 Prius have really improved. The Star Safety System includes enhanced vehicle stability control, traction control, and brake assist as well as other features. Driver, front, and rear airbags are standard. There is also the Toyota Safety Sense P system which provides a pre-collision system with pedestrian detection and a lane departure assist among other features.

Base models come standard with a 6.1″ touchscreen and a 4.2″ color information display. There is a rearview camera and keyless ignition also as standard. The Entune Premium Audio with integrated navigation is only standard from the Three trim up. The 1.8L Aluminium 4-cylinder DOHC engine is standard across all trims and has a 95 hp capability with 105 lb-ft of torque. The transmission is an electronically controlled continuously variable (ECVT) and front wheel drive is the standard across the line. Fuel efficiency is one of the biggest selling points of the Prius; at 54/50 city/ highway and 52 MPG combined, it is one of the best on the market, especially if you’re on a budget.